In his LinkedIn profile, Darren Fell (pictured left) describes himself as a ‘disruptor’. He likes doing new things. When he does, he sometimes shakes things up.

So when he became disgruntled with the hit-and-miss performance of a couple of accountants he decided to do something about it. (And I don’t just mean switching.)

“They were great at the first meeting. They told me how brilliant the service was. How academically brilliant they were at saving tax.”

“10 months later, they’ve never called me back. I got penalties. Then another penalty. And then I thought I’d give it a go. I’m going to challenge the world of accountancy.”

And that’s part of the story behind Crunch. It’s an integrated, online accountancy service. It combines friendly human advice at the end of a phone with software that will, for instance, calculate your year end in two seconds. (Handy, with January, 31st bearing down on us.)

When I spoke to Darren at a Spotlight Lunch Event in front of an audience of businesses, what really struck me was his creativity. His impatient energy to just get on, do it; keep learning and creating.

That started at an early age:

“I was always into having a brand and having products for that brand. Don’t know where that came from. I was always a bit of a geek, really. Rather than play outside with other kids, I was soldering electronics and creating K-9s.”

“My poor parents, if they ever came into my bedroom, there was a pressure pad that I put under the carpet. The alarm would go off. So they’d get a fright every time.”

“And then, when you stepped on the mat at the front of our house, the porch would say ‘Welcome to 123 Arundel Road!’ – which is where we lived.”

“I loved gadgets. I loved the whole concept of brand. That must have come from all the gadgets I had. I always loved Lego. I spent hours creating things out of Lego. It’s the absolute, sheer love of being creative and doing things and achieving things.”

The common denominator between you and your customers.

It’s because of this creativity, that Darren Fell really gets his clients. By and large, Crunch clients are entrepreneurial. They’re freelancers, start-ups, small businesses and contractors. 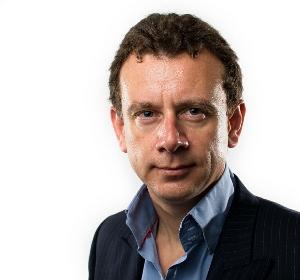 Because of this, they’re generally more interested in developing new ideas and contacts than, say, looking at the other crucial side of their business – the maths.

Because vital though they are, accounts are by their nature repetitive. Weekly receipts. Monthly books. Quarterly VAT returns. Year end. And on it goes.

But if you’re an entrepreneur or self-employed, you want to get shot of the niggling feeling that you should be filing your receipts by now. Worse, that you’ve missed a crucial deadline. (Did I mention year end?)

You don’t want figures cluttering up your creative brain.

As Darren would argue, you want someone else to ‘Crunch’ those irritating numbers for you. Crunch represents, ‘The beauty of all the pain being taken away. It’s all in one place; all online; all the things like tax liabilities are there for you’.

Keeping that link, seven years on.

Darren’s now CEO of the fastest growing accountancy firm in the UK – 6,100 clients and counting. But at heart he’s still an entrepreneur. In fact, he was a budding businessman in his teens. He filmed his sisters’ end of year dance show and, with the help of his father, sold videos at £10 a pop.

Now that he’s leading a company with 130 staff, he’s just tweaked himself a bit to become what he describes as an ‘intrepreneur’:

“Instead of creating a brand-new identity from scratch, we are now looking at every component in the business.”

“This is not your ordinary business. Last year we started scaling up, wanting to eventually reach 200 staff. But we couldn’t find that many accountants, not that fast. We just couldn’t. So you have to reinvent it and become an ‘intrepreneur’.”

“We created an academy to train up apprentices to deliver accountancy staff into our business.”

“So you become creative, not from scratch, but for every single moving part to be looked at. You can become entrepreneurial over tiny, tiny parts. That’s how you shift business forward.”

How Darren’s character feeds into the brand.

To me, it all adds up (excuse the pun) when you read these words on Crunch’s home page:

‘You live life. We do the numbers.’

Darren’s personality is in the brand. Because if you’re anything like Crunch’s CEO, you don’t want your entrepreneurial energy sapped by having to trawl through 12 months’ worth of bank statements. You just want to get on and live life by ‘being creative and achieving things’.

And to do that you need (Crunch) to clear your creative brain and de-clutter.

It’s January after all.

Stories like this prove that you’re on your clients’ side.

They’re evidence that you’ve been there and you want to help.

If you’d like to find out how your background story strengthens your brand, get in touch.

PS. My background’s at the BBC. And in the interest of editorial balance, I’ve written another post about the magic of bookkeeping: It’s better than surfing.