I’ve interviewed an eye watering range of business people over the years, in mainstream and niche sectors. The group that stands out is the one made of ‘Founder-MDs’ – the women and men who’ve forged their own businesses from ideas they’re committed to. They’ve had gut-wrenching moments along the way, sometimes when an idea hits a dead-end or when the cash flow has turned into extreme cash-ebb.

Your bright idea that began it all.

If they are like Willem de Jager at Odin Company, the thing that keeps them going is the purity of their original idea – the idea they have to see through. For Willem, it was the realisation that many of us are forced to do jobs to which we are not naturally suited. This leads to fractious hours at work and, in certain cases, burn out. His idea – the ‘Odin Development Compass’  – allows individuals to pinpoint their underlying natural strengths and work at their best.

What makes Willem and other entrepreneurs stand out is the fact that they constantly develop their original idea. They keep learning. They might be responding to market research and client requests or they might have such vision that they’re pre-empting their customers. Willem has done both. He’s already looking ahead to a time when students will be able to use his ODC tool to identify what they’re really good at and which career path to take. No more frustrating hours wasted on applying for the wrong job.

Another of my interviewees, Darren Fell, co-founder and CEO at Crunch Accounting put this desire to keep learning as “intrepreneurship”. You’re not necessarily setting up a new business but you’re alert to new opportunities within your existing field. So you’re constantly updating your knowledge and fuelling your enthusiasm. That’s gold dust for your clients. It proves you care. You’re also ahead of the game.

Keep learning to succeed in the digital world.

What prompted these thoughts was the MD of Leland Music, market leader of a sector that makes its mark on us every day but is largely invisible – sync. Abi Leland’s ability to match (synchronise) the right piece of music to the right visuals is what makes global, everyday brands truly memorable. 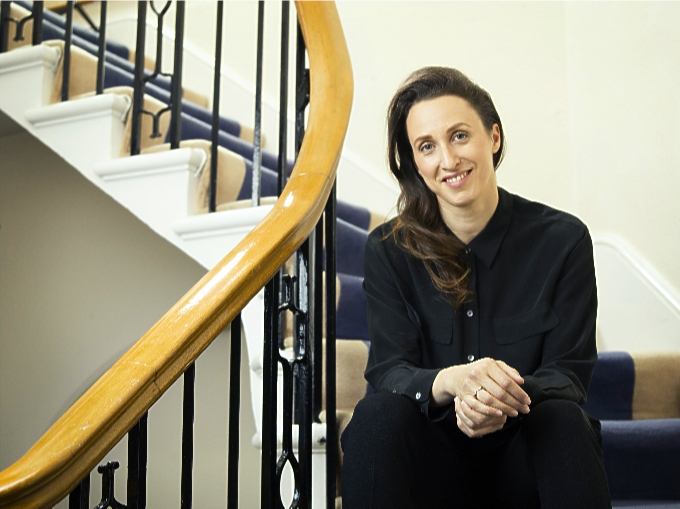 Photo by Matthew Lloyd, used by permission of Leland Music.

If you’re old enough to remember Hovis’s ‘Boy on a Bike’ with Dvorak’s New World Symphony as the musical backdrop or, more recently, Guinness’s succession of sync hits around themes like ‘Good things come to those who wait’, you’ll understand.

Or – and this is where we enter Leland territory – Lloyds TSB’s ‘For the Journey’ (Eliza’s Aria) or Three’s ‘Sing it Kitty’ (the cat lip-syncing Starship’s ‘We Built This City’) or John Lewis’s succession of heart-warming Christmas films to the strains of Ellie Goulding singing Elton John’s ‘Your Song’, or Lilly Allen’s re-working of Keane’s ‘Somewhere only we know’. Great adverts linger in the mind, thanks to sync.

CPD at its most impressive.

As Three’s ‘Sing it Kitty’ shows, sync has come into its own in the digital age. Which means Abi has to keep across every new development in social media and digital platforms. If she doesn’t, she might miss a crucial business opportunity when she’s licensing the music on behalf of all the artists involved, including composers, musicians, singers.

A generation ago, musicians used to rely on record sales and live tours to sell their wares. But the world wide web and growth of sync has changed all that. As an example, ‘Sing it Kitty’ has garnered more than 3 million YouTube views, 1.8 million mentions on Twitter and 2.8 million likes on Facebook. That’s why Abi is alert to the many different ways in which sync showcases a piece of music. It all contributes to the value of the work in hand. It’s also an area of constant learning, which gives her a buzz.

Then there’s the music itself. Abi and her team receive thousands of individual tracks every week. In the days of CD and vinyl, it would have amounted to several sack loads to rifle through. This mountain of music is topping up a collection Abi began as a child.

Her father, David Leland, was a film director and screen writer, whose credits include ‘Wish You Were Here’ and ‘The Land Girls’. He loved jazz and classical, which he played in the car. Abi also immersed herself in chart and world music thanks to her mum, who organised the Children’s Field at Pilton – later Glastonbury – Festival. “My first driving lessons with my mum were all round the fields when Glastonbury Festival wasn’t on, crashing into the Pyramid Stage. So the Festival was quite a big part of our lives as children. There were always quite a lot of musical gatherings, as one can imagine…”.

So in terms of sync expertise, Abi had already clocked up significant hours of learning by the time she reached her teens. (Get a sense of her breadth of knowledge on her website). Then she began a series of apprenticeships, including being a runner at Sarah Radcliffe’s.

What’s joyous about that period of your life is that no one expects you to know anything. So you can ask questions and no one is going to go, “Don’t you know?” It’s actually a lovely period of life to be in because it’s just learning, learning.

Your learning means so much to your clients.

If you’re a Willem, Darren or Abi, the fact that you’re constantly updating your knowledge is great news for your clients and potential customers. It shows you’re still enthused about what you do. It means you’ll do your best, as well as bringing impressive expertise to the task at hand. That’s how companies build their reputation.

As Abi has said of her own work, she doesn’t necessarily want to be the biggest sync company but she does want to be “the most respected”. Her position as an award-winning authority in the sync world is partly rooted in the fact she’s constantly adding to her body of knowledge, formally and informally. CPD – continuing professional development – at its most impressive. (I’ll be speaking about learning and ‘Growing your reputation’ at this year’s Brighton Summit on Friday, 16 October 2015.)

Continuing to learn not only makes you more valuable to your clients and helps you to build business. It’s also shown to be one of several ways to build your emotional resilience. So if your business is going through a tough time and you feel like you’re wading through treacle, continuing to learn is one of the techniques you can use to gain new perspectives on a difficult situation. It’s recognised within the NHS and Public Health as one of the ‘ways to wellbeing’. (Discover what a difference it can make in the NHS mood zone.)

Learning: a bonus for business and the people who run it.

So, as an erudite Bruce Forsyth might say, “keep on learning”.

It’s good for personal and professional development and – to my mind at least – it’s one of the qualities of a great entrepreneur.