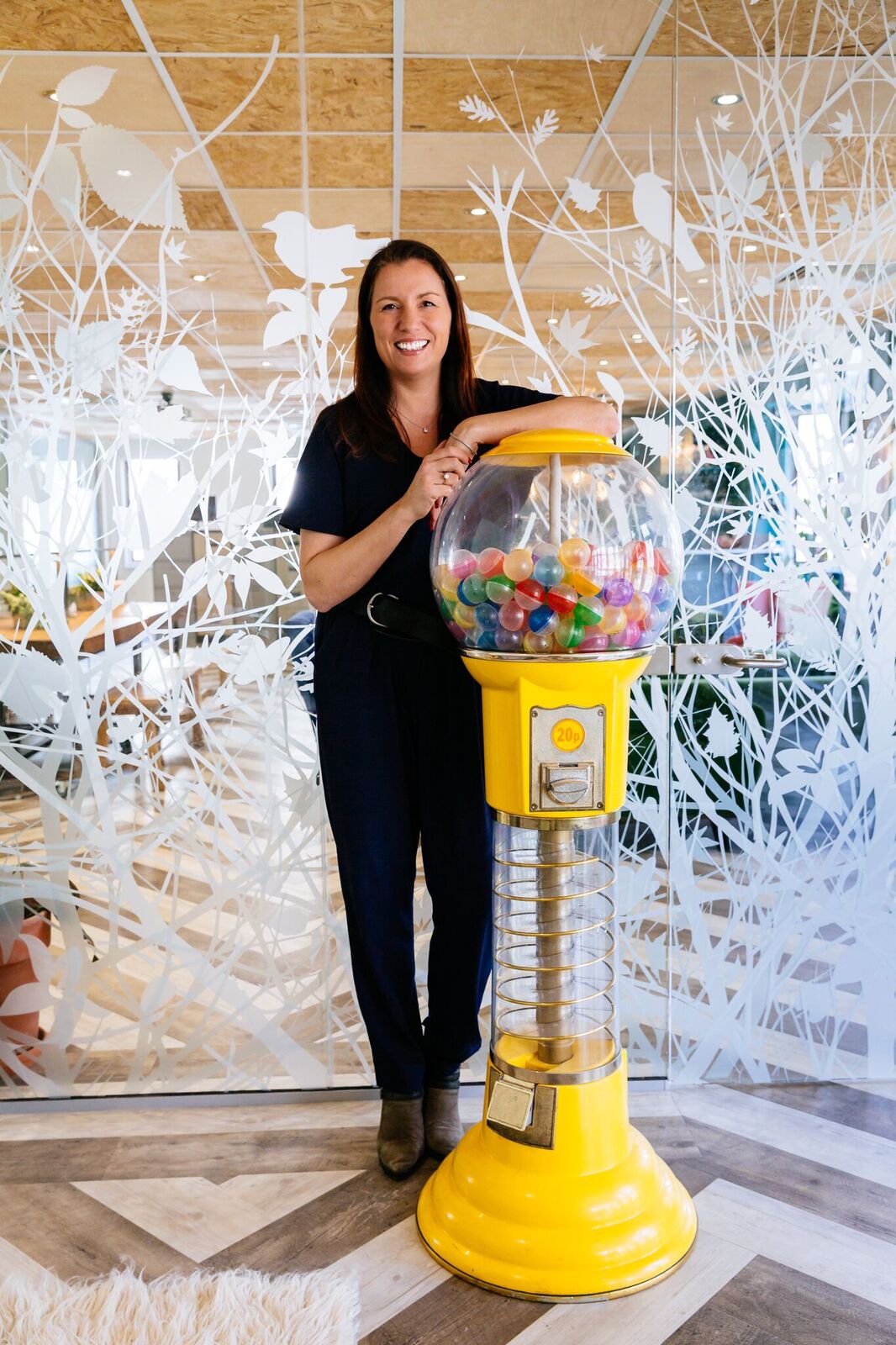 I first met Nikki Gatenby (above) when I was chairing a discussion about high growth companies. She was a great panelist, energetically fluent about how she had grown her SEO and search marketing agency Propellernet.

She’s done it by focusing steadfastly on the wellbeing of her team and their sense of purpose – “to make life better for our clients and their customers, our team and the community”.

If you’ve woken up this morning feeling cynical and you read the last sentence and thought, “Yeah, yeah, I’ve heard that one before”, well, I did too, at first. Because lots of companies claim to put their people first, but don’t.

By the end of the discussion, I was forced to take back my cynical thoughts. Nikki told several stories that proved that Propellernet (based in Brighton) really does have a business plan that focuses on making the “dreams of its team come true”. (The globe that Nikki is leaning on is the Dreamball Machine, by the way.)

This includes using some of Propellernet’s surplus cash to buy a four-storey house. The company converted it into flats and offered the team first refusal on buying, i.e. gave them a chance to achieve their dream of getting on the first rung of the property ladder, without having to compete with cash buyers or wealthy Londoners wanting a second home by the seaside.

Then there was Sophie. She’s a member of Propellernet’s team and she’s always wanted to go on safari. Propellernet sorted it out. How? By having the imagination to barter its own services. It offered to develop a marketing strategy for Wild Dog Safaris in Namibia, in exchange for free safaris for Sophie and quite a few of her colleagues.

Propellernet’s commitment to look after its team is recognised by third parties, such as the Great Place to Work Institute. It’s put Propellernet in the top 15 best places to work for six years running, including 2018.

For better… and worse.

I could go on with more stories and statistics. But these three examples prove that Propellernet is serious about making sure its team of 60-odd people love going to work. They willingly do their best for the company and their clients. Performance based on purpose not just pay, with first-hand stories to back it all up.

Hearing Nikki talk was good. Reading about how Propellernet has made this journey in her book Superengaged is even better, partly because Nikki is so honest about the tough bits. 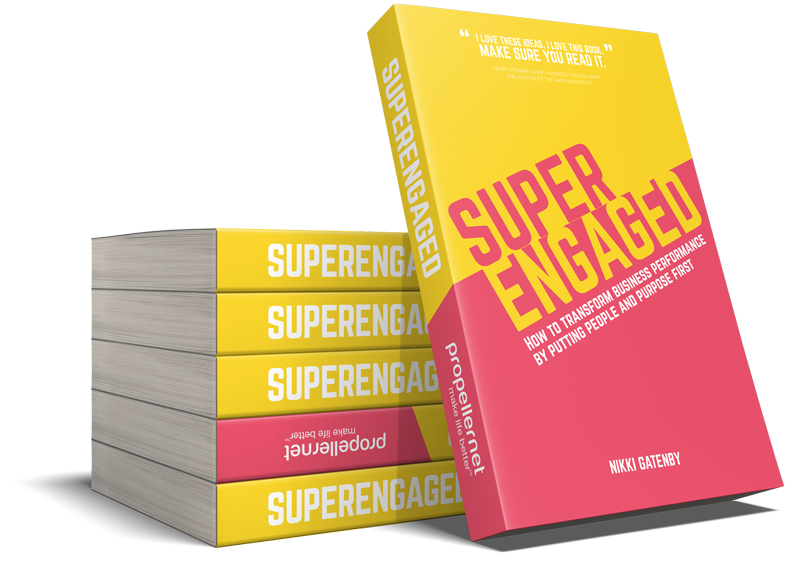 I’ve written before about how you’re more compelling and credible if you’re open about the lows as well as the highs.

Sharing the tougher times at a live event is one thing. But laying everything bare in print takes it to a new level. Just as Nikki was happy to tell stories about the positive side of her company – like dreams – so she’s willing to share the details of when things have gone wrong. Yes. Voluntarily offering evidence of how she and her colleagues have learned the hard way. And she has the generosity to share all this, so you can sidestep the hard stuff.

A juicy story for you.

As an example, I’ll quote a bit from Propellernet’s early story. The moment when Nikki and her colleagues “let out a few juicy words” as they “belatedly” worked out that only 30% of their time was being billed to clients: “Based on the people we had in the building and the number of hours we were charging, we were only working on client projects for one and a half days a week. No, we’re not joking; it’s not a laughing matter. One and a half days a week. *!?*%$£*!”

(You’re probably thinking, “Exactly what proportion of our team’s time is being billed to clients?” As you’ll learn in Nikki’s book, it’s a sum worth doing earlier rather than later.)

Stories like these might never have come to light had Nikki not asked some trusted colleagues what they thought. They included Steve Stark, who created the Culture Catalyst engagement survey. This helps organisations like Propellernet to become better places to work. Incidentally, Steve created the category of ‘Superengaged’ just for Propellernet. The responses in the survey were so enthusiastic, ‘engaged’ didn’t do them justice.

Nikki’s very frank about how she realised that being frank was the best way to go – and there’s a weeny bit of juicy language in this next story, just so you know:

What worried me was coming across a little bit arrogant and that is not me. Confident yes. But not arrogant. I asked a number of people for feedback. Steve Stark was absolutely brilliant, coming back with feedback and honesty. He said to me, “You know Nikki, I love the book. But you are not going to like the feedback I’ve got for you”.

I thought, “Oh, this is going to be interesting. I wonder what he is actually going to say?” You’ve got to ask people you trust for feedback. You don’t want the Emperor’s New Clothes scenario.

When (a bit of) brutal honesty works.

So this is what Steve said:

The book is brilliant. Your style is strong. It’s easy to read. I want to read it but… I don’t believe a fucking word of it. It’s too good to be true. It’s too glossy. What you have forgotten Nik, is the pain of when you started. How bloody difficult it was. All the troubled times when you would be sitting there with your head in your hands in the boardroom saying, “Oh my God, how are we going to change this?” You need to go back to that point and create empathy and fess up to the problems. You need to go back to the beginning and remember how bad it was. That is the story people want to read because that is the one they can associate with and have empathy for. They may be in that position now or have been in the past. And they will know that you are really speaking the truth.

Okay. It was like a punch in the stomach. But thank you, Steve. I am so glad you said that, because I didn’t want it to come across as inauthentic. And it’s true. In the early days, some things didn’t make great business sense. But that is what everyone does. When you are experimenting or innovating, some things just don’t work. It’s fessing up to that. It’s knowing that it is okay to fail and then you will have the data to tell you to do something different.

As I described at the beginning, Propellernet has gone on to do things very differently, for its team and, as a result, for its clients. Like its pioneering PR and content marketing tools CoverageBook and AnswerThePublic. These are just two of the company’s big wins. But as each chapter points out, “you win some, you lose some”. The trick is to be intellectually humble enough to learn from your losses, so you go on to win later.

How far should honesty go?

Nikki points out that being honest about Propellernet’s journey wasn’t painless:

Like most humans, I go towards positivity. I am not great being in a negative space. It was really hard to start with, but I was so glad that Steve said it because it has made the book much more authentic.

When it came to being candid, there was one part of the Propellernet story that Nikki thought hard about: the team’s approach to clients who threaten to muck them around. Propellernet has a one-line, deal-breaker summary on this: “We don’t want to work for bastards, so we won’t”. The book is brave enough to outline two instances where Propellernet decided to cut loose from clients who, let’s be clear, did not fall into the ‘bastard’ category. But the relationship wasn’t as rewarding as it could be. Nikki also shares the company’s checklist for every prospective client. Checks include: “Is there a decent brief?”; “Are we excited by the opportunity?” and “Is there a clear budget?” (No more juicy language about billable time, then.)

The client stuff, I really, really wrestled with. The ‘no bastards’ approach, in particular. It’s not there to be disrespectful. It’s quite the opposite. It is making sure we can offer the best possible ideas and servicing to clients who deserve it. I love that quote from David Ogilvy: “Clients get the advertising they deserve. Some behave so badly that no agency could produce effective advertising for them. Some behave so well that no agency could fail to do so”.

As I wrote in my review for this book, Superengaged offers you proof that happy staff really do make the most successful companies. And I believe every sentence because Nikki’s upfront about the difficult bits. She has, in Steve’s words, “fessed up”.

It’s good, it’s true and I highly recommend it.